I have just returned from a vacation through a National Forest, a National Park, and what I think could be called a National Parkway. That is another set of posts, but it is important to the context of this post.

I was off work today (Friday), and wanted to take advantage of the fact that people are at work, so traffic is reduced. I made my way over to Patterson Fruit Farms to pick up some  fresh strawberries. After loading up on strawberries, their famous apple butter, a strawberry rhubarb pie straight from the oven, and some Schmucker’s Super Sauce for Father’s Day gifts, I headed out back to take a look at a relatively newly established park abutting the property called Orchard Hills Park. It is my understanding that at one time this was Patterson family property that was developed into a golf course in 1962. In 2007 the golf course closed, but the Patterson family established a shared use agreement with the Geauga Park District to turn it into a public park.

George and I discovered it ourselves back in March of this year (after purchasing some of Patterson’s recently tapped maple syrup) and were intrigued. It was erie, but beautiful. Kind of like a scene from a post-apocalyptic themed movie. You could clearly see the features of a golf course; the sand traps, the green, tee-off areas, and oddly situated ponds. But it was overgrown, with weeds starting to completely take over the formerly carefully manicured grass.

But with all of this degradation, new life was popping up everywhere. There were wild flowers poking their heads up from the brush, formerly controlled tiny streams overtaking their manufactured beds, people jogging and walking dogs on the pitted, crumbling golf cart path, and most interesting of all, little bird houses scattered around the property claiming to be tools of a blue bird species re-introduction program.

Think about it. To build a golf course, you need to plow over pretty much the majority of the native plants. Then you carve out flat areas of the earth, then erect new hills where you think hills are lacking, and then install impossible “ponds” in strategic places. Then you plant super special grass that is carefully (and often heavily) fertilized and manicured, all over the stripped land. Animals? They are in the way. Keep out as many as you can. To have some around is quirky and adds to the experience, but overall you need to maintain a certain cleanliness. No poop, no tracks or digging on the fancy grass, and certainly no interruptions or interference. Then you charge people large sums of money to play, a larger sum to join the “Club”, and even larger sums for the privilege of building a home around the course (golf and membership are an extra fee).

So the idea that this former “Country Club” was being re-claimed by nature was a thrilling proposition to George and me. We declared that we would return in various seasons to see how things look, as at the time it was rather barren looking after a harsh N.E. Ohio winter. Today, it looked just beautiful against a bright blue, sunny sky. 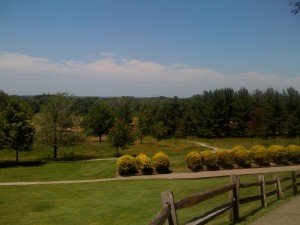 I did notice that there was a bulldozer working on a recently excavated patch of land.  I popped into the snack bar (probably part of the former Country Club), purchased a pop and asked the woman behind the counter “so I see some construction going on down there?” She responded, with a bit of an eye roll, that that they were doing some work on the park. “It’s owned by the Geauga Park District now, you know.” I replied enthusiastically that I did know and was therefore concerned when I saw excavation. “I guess they’re getting rid of some of those oddly placed golf water features.” She said that they had moved a pond. But then something occurred to me…she’s not happy about this.

“They’re putting in some wetlands.” “Putting in” wetlands? From what I understood from literature I read, they were “re-establishing” wetlands. I said that it would be nice to see it go from a golf course to being pristine parkland again. “Oh! It was pristine! It was a beautiful golf course!” Obviously she and I had a different idea as to what is considered a “pristine” natural landscape. “You should see some of the former members when they come by. A tear in their eye over what’s being done.” But, I said, I thought that they were removing the more artificial golf landscape and allowing the native species to move back in…the wildlife, the plants…I’m really not a golfer, but it seems to me that it is a good thing to remove artificial nature and let real nature move in.

She added that they are putting in a sled hill, and are going to offer some cross country ski trails. We agreed that would be terrific for her business and they could have some winter service of soups and coco. But then she continued, “Oh but it was pristine! It was beautiful! My friend has a home near here. She just put in a pond and tennis courts, and already! Already she is having trouble with people wandering over thinking it’s part of the park!”

I realized I was approaching an argument and needed to make an exit. “Sounds like your friend needs to consider a fence!” I thanked her for the pop, cordially wished her luck with the new opportunity, and went on my way. Fuming. Golf. An interesting game of skill. But at what cost? How much fertilizer do they use? How many habitats are plowed over, animals removed or frightened off? How many non-native (and therefore potentially invasive) plant species introduced? How much water used? And how is this better than a park? Didn’t her friend have golfers wandering her property ever, confused that it was part of the course?

I don’t know. The more time I spend outside, in the amazing National Park System, or my beloved local Cleveland MetroParks, the more I am conscious of over-development. I even have been taking a second look at my yard. Have I become a crazy hippy, or am I just looking at the world with my eyes open wider?