I was so inspired today that I needed to post to my poor, neglected blog.

All of you who are from CLE and are my age remember 107.9 The End and that it was the “Alternative” with a Capital “A” station that swooped in unexpectedly in 1992…the station spending 24 hours playing “It’s The End of the World as We Know It” by REM over and over…between classes at school asking people with Walkmans if it was still playing that same song…”What could it be!?!?!?”….then sadly disappearing in the same EXACT way in 1999, but this time not before a DJ locked himself in the studio for a couple hours that morning ranting about the injustices of the corporate culture of radio…24 hours of anguish as I listened to REM over and over wondering what was up to find the next day MY station was gone, and replaced by a station playing some of the more misogynistic “hip hop” of the day.

Fast forward to August 2012, me in an uncomfortable suit sitting in the lobby of Entercom-Seattle waiting for my interview. I researched the company before coming in. One of their 4 stations? 107.7 The End. “Classic Alternative” and new music. I’m nervous, obsessing over my resume, and what do I hear over the sound system?

The End was celebrating it’s 21st birthday in Seattle. In Seattle. And I nailed the interview. And I got the job. And I love it.

And today (casual Friday), just because I was feeling nostalgic I decided to wear my EndFest 1997 shirt to work. 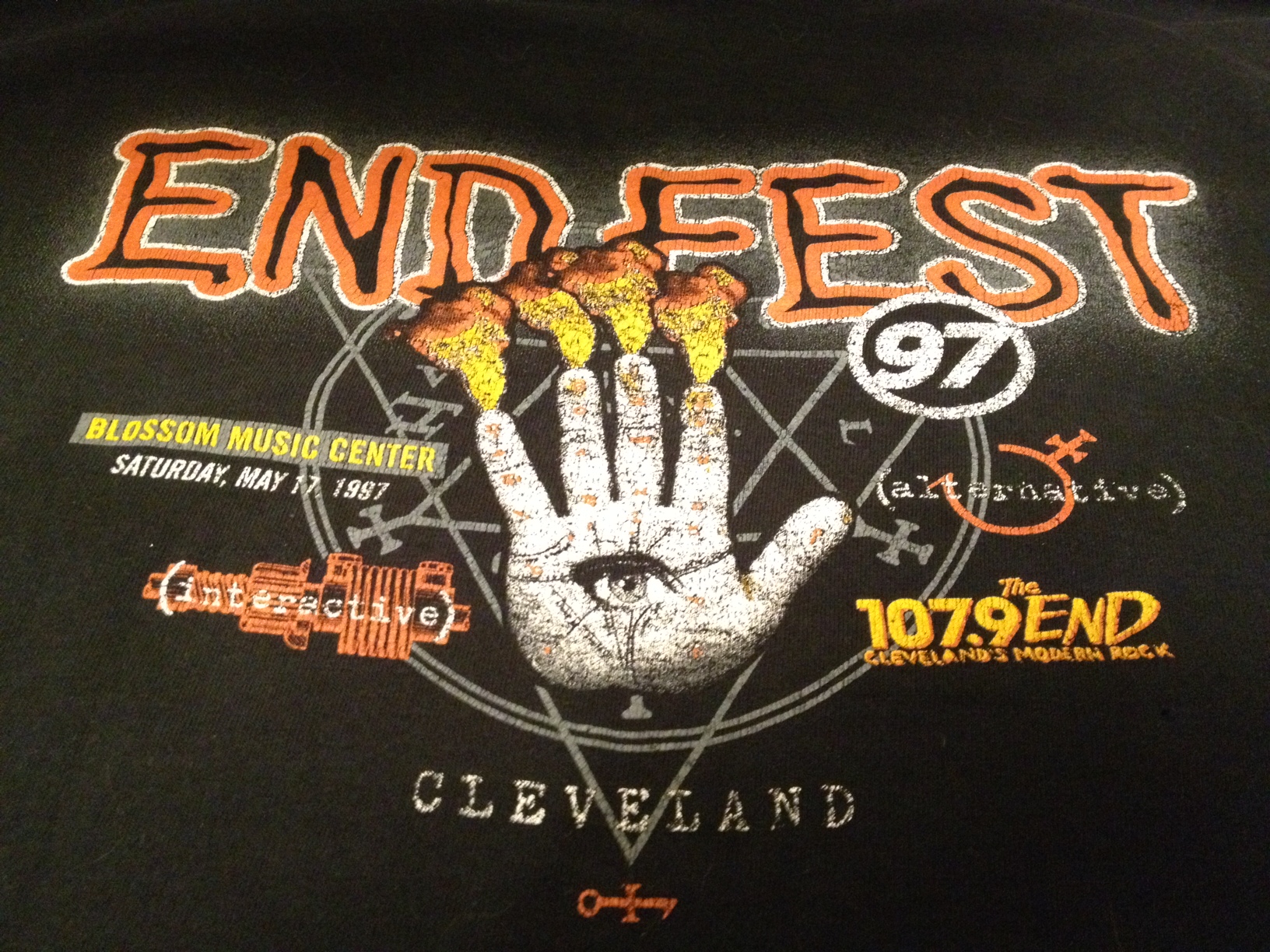 No one could have prepared me for the attention I would receive. The senior VP of Sales & Marketing patting me on the shoulder, telling me I was rockin’ it “vintage”. My boss the VP of Sales making me stand up and twirl, followed by high five. The GM of Sales for The End coming over, sniffing and saying “Oh the memories! I love it! The memories! Thank you!” And the 25 year old junior salesman for The End, and a couple of production folks and one DJ from The End asking “Where did you get that shirt?! That’s sweet!”

To one or two of them I explained The End in Cleveland (I’m unclear on the technical connection…I know it exists but it’s surprisingly loose)…how it was cut off so suddenly and brutally in 1999. How I can’t find many photos on Google because it was before Facebook, Twitter, MySpace, affordable digital cameras…and film was EXPENSIVE to process for a broke college student. And that none of us really realized what a huge moment this was…how important…until it was gone.

Years later, now enjoying the truly precious prize of getting to pick up where I left off in my musical development that had truly begun in high school & college, I realize how significant that time was. I used to blow it off, saying “well, it’s just because I was in the middle of it that I thought it was so important.” No…it really WAS that important. I don’t like calling it “the grunge movement”. That’s only a piece of it. It was the Alternative Music Movement of the 90’s…it was distinct and varied in its content. It was a seismic change. And though some of our heroes/martyrs/kooks died or faded away, some are making comebacks, and others never faded…they just kept evolving, staying relevant, and are on the path of becoming “legendary.”

It was The End of the World as I knew it. And I feel fine.

P.S. If you haven’t watched this, you need to. Illustrates the enormity, significance, and beauty of “my” music and how it has found its place in music history. And I have to say, fortunately, more often than not, when I hear new music by 20 year-olds that is obviously influenced by “my” music? It makes me happy. As long as they know where it came from 🙂

This entry was posted in Adventures in the Cube Farm, Art, Cleveland, Music and tagged Alternative, EndFest, Music, The End. Bookmark the permalink.
Logging In...