Memorial Day got me my first real wave of homesickness since our move a couple of weeks ago. We went over to Seattle Center this morning because on the Folk Life Festival  they listed a Memorial Day service on the agenda. It was brief, most of the speeches were about the festival, not about veterans, and only a handful of veterans were there to present the colors. But it was nice. There was a terrific choir, and the crowd was kind and cheered warmly.

But it was nothing like Memorial Day in Chagrin Falls, OH. Memorial Day weekend as far back as I can remember has been Blossom Time in Chagrin. It’s fantastic, and you should go. It’s a 5 day, city-wide festival with a carnival, hot air balloon races, a Fun Run, food music, art and so much more. The last day of Blossom is technically Sunday, when they do the big (and I mean BIG) Blossom Time Parade. In the lead car? My dad, in the city’s ’57 Chevy police car. 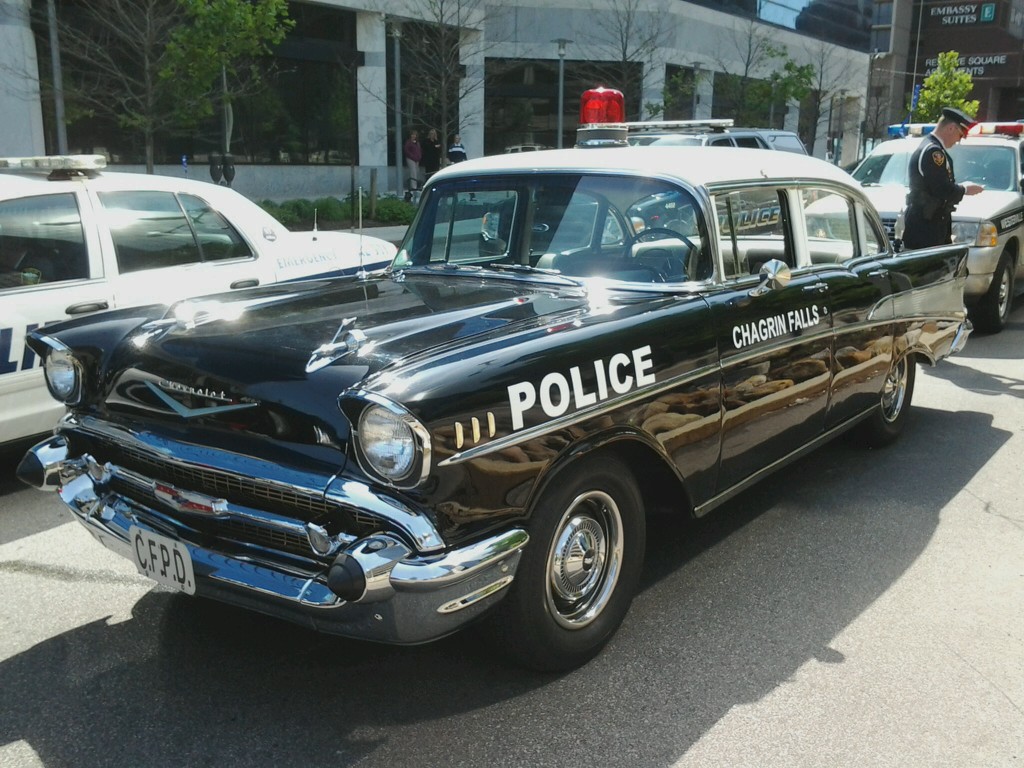 Veterans representing WWII, Korea, Vietnam, The Gulf War, the Iraq War and the war in Afghanistan. All branches of the military, their vehicles, and an enormous flag, proudly, quietly and formally carried by representatives of all branches in formal dress. Of the thousands of people who come to town to see this parade, it’s hard to find a dry eye or anyone not cheering. The thing is, these are not actors. Some of these people…these kids…JUST GOT BACK. You can see in their eyes, from ages 19 to 90, that they have seen things no one should have to see, and they’re touched (if not a little embarrassed) by the affection and appreciation from the crowd.

But this isn’t the real parade. This is what the town calls “the candy parade.” It’s terrific and a great way to start the summer. But the real Memorial Day parade is on Monday, after the roads have been swept, the food concourse torn down, and the rides in the park are loaded onto their trailers. Bright and early in the morning, the veterans, girl scouts, boy scouts, police department, fire department, the bagpipers, the Chagrin Falls High School Band, and anyone else who wants to walk in support gather in the main shopping center parking lot. After everyone is accounted for, they all line up, the band sets the beat, and the parade slowly rolls out onto Main Street lead by the ’57 Chevy. The streets are not lined 20 people deep, people standing shoulder to shoulder, but it is no small crowd. It seems the entire Village of Chagrin Falls, and some of their neighbors, all woke up early in spite of any late night parties, to honor the veterans on Memorial Day. Flags everywhere. People in their front yards serving coffee, cheering and waving to the brave men and women of their town (whether they live there, or are merely temporarily stationed at the armory just at the edge of town), who bravely answer the call of duty, not with the words of politicians in their hearts, but with thoughts of their loved ones and their country in their hearts.

The procession goes up South Franklin Street, still lined with applauding, misty, smiling people, those marching still quiet except for the drums from the High School and Piper bands, and the quiet “hup…hup…” of the soldiers marching with the colors. The procession ends at the town’s cemetery. It is a huge cemetery with graves and monuments dating back to the Civil War, intertwined amongst so many old tall trees that you feel like you are in a forest. The cars are unloaded, the people gather around. I believe there are 3 monuments. I feel bad that I can’t specify which ones are which. I think there is a VFW memorial, a WWII memorial and the Civil War memorial. At each of the 3, a representative says a few words, the flag is raised from half staff, taps is played, and there is a 21 gun salute.

I have to say, the hardest thing I’ve come to see over the years of attending this is that before these were distant memories of war we honored…now when we go we see heartbroken families of kids who didn’t come home holding each other tight while taps plays…makes me choke up to think of it. 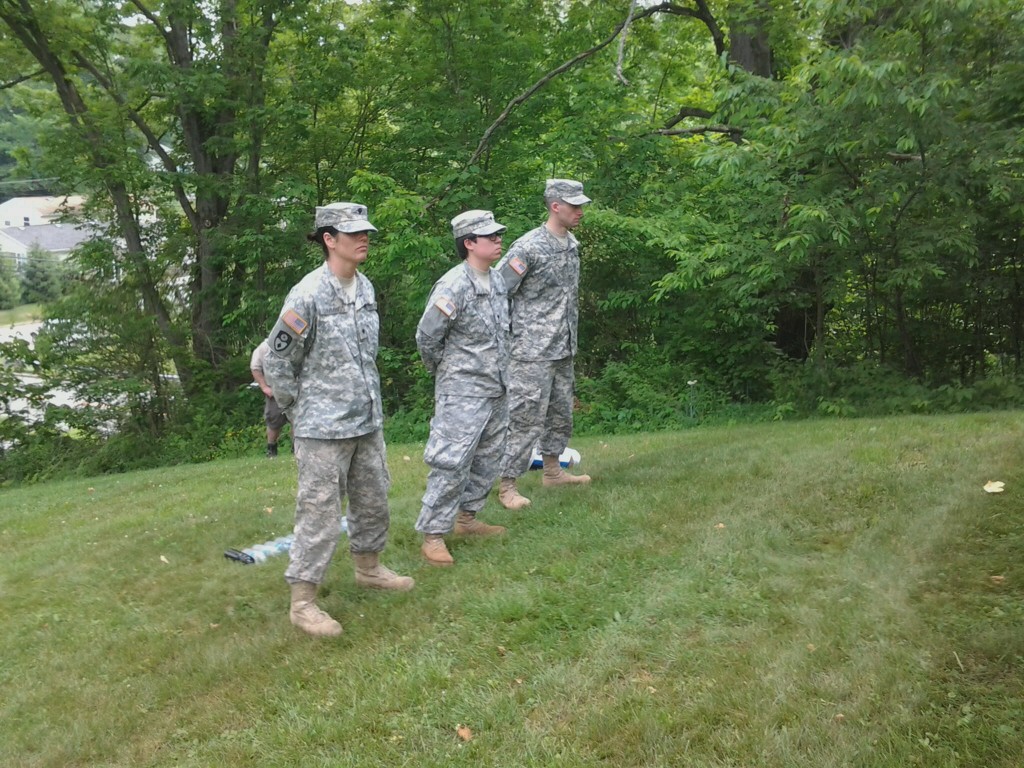 At the last monument there are chairs set out, speeches from students, military representatives, and town officials (and honestly, they’re not dull…they are very nice speeches), a choir sings, the band plays the National Anthem, and my dad sets off a small cannon (not his idea…this is a long-standing tradition that was handed down to him…and he loves it 😉 ). But wait, there’s more…for the past 3 years, my dad has gotten them on the list of Air Force flyovers. This year a C-130 did a PERFECT fly-over, going right through the center of town, and up and around the cemetery, to the great delight of all who attended! Then, believe it or not, everyone lines up again, and proceeds back into town. Everyone lines up around the Triangle (Chagrin is too small to have a square…they have a triangle), and the police, fire, military and bands all line up perfectly, beautifully, to salute the flag. Beautiful Amazing Grace from the Pipes, beautiful National Anthem from the High Schoolers, and the big flag in the center of town is raised. Not a dry eye in the place, but honestly, everyone feels invigorated.

I have been to a good number of Memorial Day ceremonies over the years, but Chagrin Falls does it right. I encourage you to go next year. You’ll never forget it.