This past Saturday, in spite of the gloomy, rainy, cloudy weather, I heard the call of Spring, and decided to answer. It’s Maple Syrup season in North East Ohio, so I headed out to visit my favorite provider, Patterson Fruit Farm! 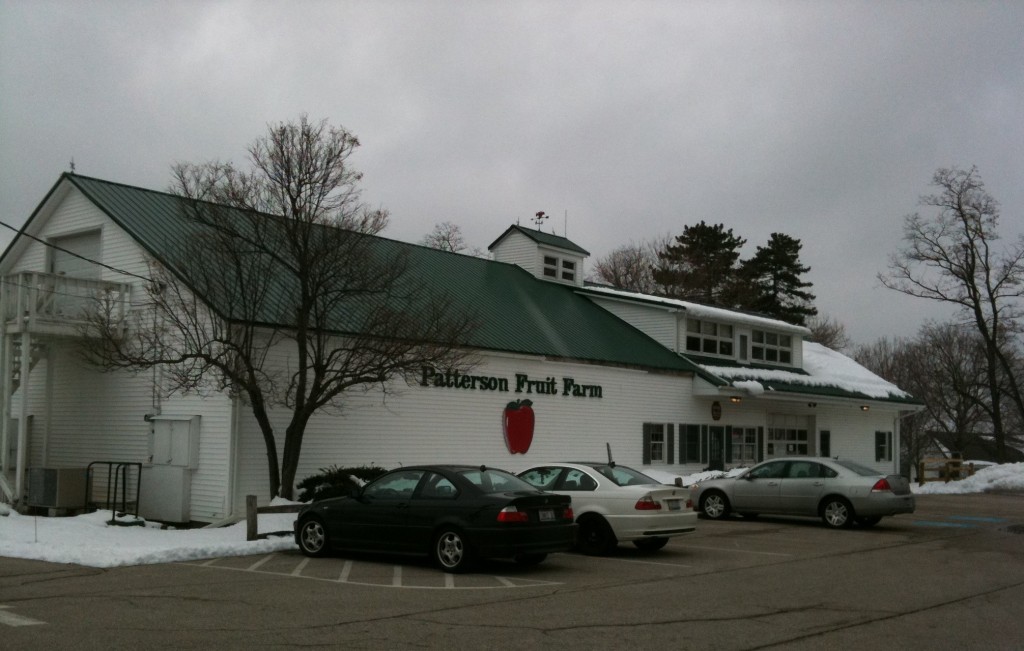 Though primarily known for their apples, they are open year-round, seven days a week, with goodies galore. They have a bakery, shelves full of locally canned fruits and vegetables, baking mixes from a local flour mill…late spring they harvest strawberries, in the summer they carry corn, tomatoes and other veggies from local family farms, and in the fall it’s all apples, squash and pumpkins. But in March, it’s Maple Syrup time! 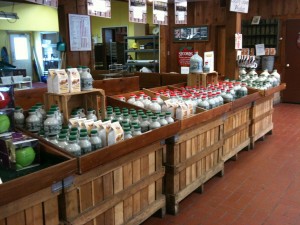 They launched a Facebook page just for the Maple Syrup updates last spring. It’s not as active this year (they’re primarily using their main Patterson page), but last year they did post some short videos of them going into their woods with Barney and Bob (their Percheron Draft Horse Team), along with a handful of photos of tapping the trees and collecting the buckets.

Back to Saturday, I pulled into the Market parking lot first. The main farm is actually down the street, though they do have Maple trees and some apple trees on the property, which is up against Orchard Hills Park, formerly a golf course, and before that part of the original Patterson farm. Due to the weather I skipped a stroll in the park, and went straight to the syrup. There was no one in the store except for the shop keeper. After answering a question or two for me and heading to the register, he said “would you happen to be interested in learning about how Maple Syrup is made?” I answered without hesitation, “Why, yes I would!”

He directed me down the road to the farm, where he said they were boiling today in the Sugar House, and they’d be glad to show me how it’s done. It really is a neat approach to the farm. The driveway is very steep, so when pulling in you get a great bird’s-eye view of the orchard spreading out over the hills. I spotted either Barney or Bob grazing in the field outside the barn (I paused and waved) and parked outside the door marked “Sugar House”. 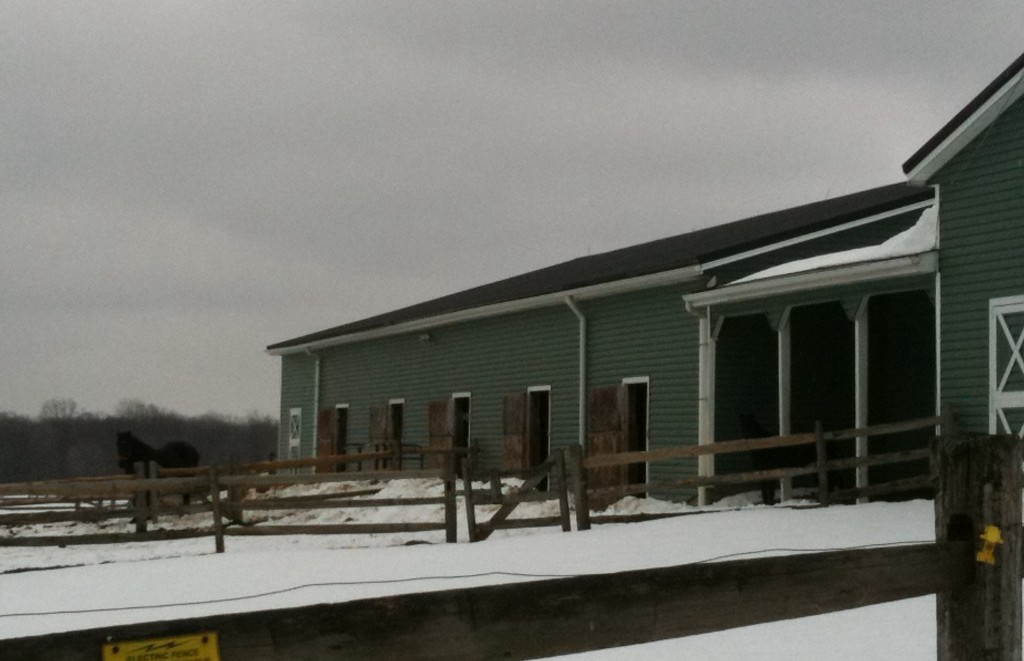 Grown-up horse on the left, and if you look closely and squint, you can see a smaller one in the shadow of the doorway on the far right. 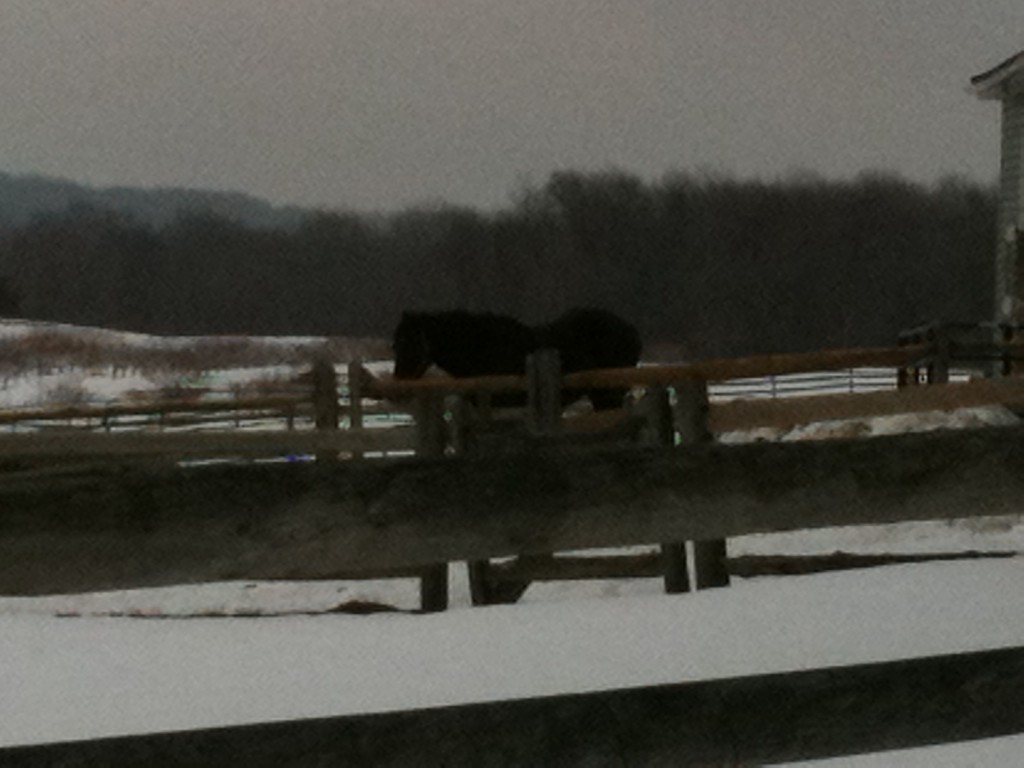 ﻿﻿Outside was the huge white, plastic tank filled with sap that I had seen in the Facebook videos, this time hooked up to a hose and motorized pump.

I opened up the little door and a huge cloud of steam and noise poured out into my face. I hesitated, as I only saw 3 people…the Patterson Man and a young couple seemingly there for a social visit. I was expecting more of a crowd, or maybe an organized event like setting. Nope! “Come on in!” Patterson Man shouted over the nose of the machinery. I’m going to assume from the ONE photo I was able to find on line that Patterson Man was in fact Mr. Jim Patterson, the father of the current co-owners. We’ll go with that. As for the young couple, it was a boy who used to work on the farm just visiting, bringing his girlfriend around to meet his old boss and tour the farm. 🙂 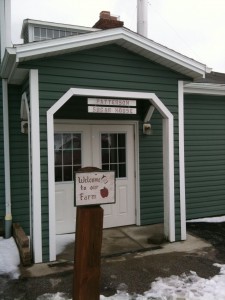 Mr. Patterson was a complete delight! A man who is passionate about his work, and excited to show people how it’s done. I wish I had taken notes, but basically, when I walked into the room, about a third of it was filled by a large stainless steel box…the evaporator. 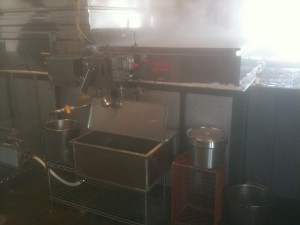 The cold sap was being drawn from the tank outside, and ran through copper pipes into the machine. Inside of it are metal pans that are heated from the bottom. The sap runs across these hot pans and is brought to a boil so that the water will evaporate. There are filters involved at some point in the process, but ultimately it ends up in a row of open pans with divider walls where the concentrated syrup separates itself from the more diluted syrup. 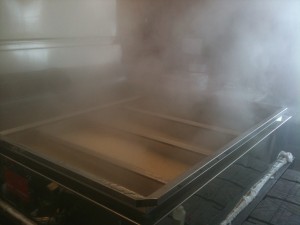 The operator has to spend pretty much all day with the evaporator, carefully monitoring the color and temperature (about 219 that day). The syrup then migrates to another section of the machine where it can be bottled.

“Maple syrup is one of the purest thing you’ll find!” he shouted. The finished syrup runs through copper pipes directly to the bottles, still hot, and sealed on site. It’s sterile and will keep indefinitely in the sealed container. He poured me a small tasting cup directly from the machine. OH SO GOOD!

The steam (that made it more or less impossible for me to take video) was the evaporating, distilled water. Apparently in the past the water was considered 100% waste, but now they have a newer system that uses the steam to maintain the heat, thus making it a more energy-efficient process. The machine has a spigot on the side from which you can drain the water, and they use to clean the room.

I mentioned that I saw the horse grazing outside. He said that they prefer to use the horses still because they do a lot less damage to the woods when they go in to retrieve the sap than a tractor does. In the late spring, they have to go out there while the ground is still wet and re-grade the area so it will be in good shape to walk through the following year. The less they have to do, the better. But that day they did have the tractor in the woods. The horses seemed tired and maybe a little muscle-sore that morning, so they gave them the day off 🙂 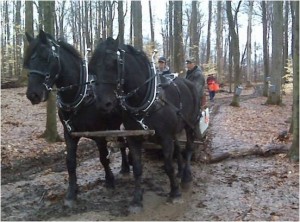 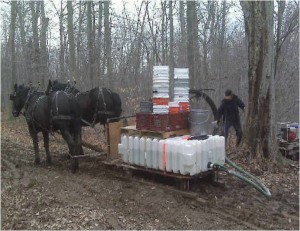 And do they really HAVE to still go and manually collect buckets? Well, there are tube systems that other farms use. In fact, they implemented one of the first tube systems back in the 60’s. The problem was that the woods were in the wrong place…down hill from the barn. So gravity needed too much help, and it just seemed better to go back to the bucket system. Mr. Patterson assured me that the bucket system is easier than it was in the past. “They have developed new ones that can safely left on the trees all year round!” Previously they had to put up the buckets and take them down every season.

The conversation finally turned to Maple Syrup applications. 294 degrees and well stirred until thickened, and it’s ready to pour into maple candy molds. Better yet, drizzle it onto a sheet pan filled with pressed down snow, and you have bits of taffy-like candy. 294 degrees, then allowed to cool to room temperature, then stir, and you get maple creams. 298 degrees, and you stir until POW it suddenly develops crystals, then strain to leave maple sugar. I found this more detailed list of instructions here*. They are very much what Mr. Patterson described.

All in all, a great surprise adventure for the day! Keep a close eye on their web site, or check out their page on Facebook to get the updates on when it would be a good time to stop by!

*I have not shopped on this web site before, so I have no input either way on their product or services. It was the instructions for the candy-making that I thought looked the most legit.
This entry was posted in Adventures in Education, Adventures in Food, Adventures in Tourism, Farmers' Market, Northeast Ohio and tagged Maple Syrup, Patterson Fruit Farm, Sugaring House. Bookmark the permalink.
Logging In...